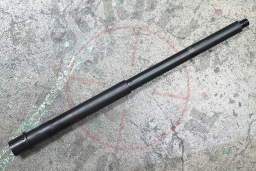 The Sept/Oct 2017 Backwoodsman Magazine had a good article on the AR 15. It’s nice to see them being open to the AR platform. I think the AR 15 is ideal for the Backwoodsman or Backyardsman. The article was positive, but the author left out the biggest point: How easy it is to build, repair, or reconfigure an AR 15. Just about anyone can do it, with no expensive tools (i.e. lathe) or specialized skills required. If you have average or better hand-eye coordination and you can follow simple instructions, it’s easy to work on an AR 15.

My AR 15 is one I built myself about 3 years ago. I put it together not really knowing what I wanted. The lower is configured as an A2 (fixed stock). I’m OK with that, but I flubbed the upper. Barrel is a Black Hole Weaponry carbine length HBAR. Heavy. Rail is a Daniel Defense RIS-II. Heavy. Flash hider is a BE Meyers 249. Heavy. The scope and mount are also on the heavy side.Because of all the heavy parts, the gun itself is heavy – not what I really want.  The problem is I bought my parts without thinking about what I really wanted.

How to reconfigure an AR 15

Luck for me, it’s really easy to reconfigure an AR 15. My main goal was to reduce weight but keep the Black Hole barrel. Adding up the weight of things I could reduce gave me a total weight of 40.5 oz. (RIS-II 14.1, BE Meyers 3.1, LT104 7.1, and Viper PST 16.2). I started looking for lighter replacements. A Daniel Defense MFR is 8.4 oz. A plain A2 flash hider is 1.1 oz. lighter than the BEM 249. Aero Precision’s ultra light AR 15 scope mount is 3.3 oz. I can’t afford a new scope just yet, but Nikon M223 scope is an ounce less than my Vortex and gives twice the magnification.

Changing out the scope mount and flash hider is easy. The only potential issue is replacing the rail. Most of the time you’ll have to pull the gas block and tube to get the barrel nut off. In my case I hope it’s not an issue because my new MFR rail uses a similar barrel nut as the RIS-II. This is kind of a big deal to me because I used red Locktite to put the gas block on, and I don’t really want to take a torch to it. We’ll see when the MFR gets here later this week…

So what will I gain? Replacing the rail, flash hider, and scope mount take 10.6 oz. off the gun. That might not sound like a lot, but it should really change the feel and balance of the rifle.

One Reply to “Reconfigure an AR 15”