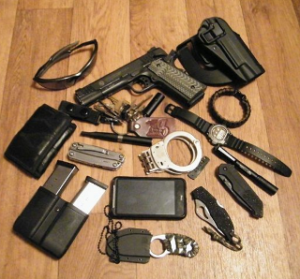 I spend a lot of time thinking about what to carry with me when I go out. You know, Every Day Carry (EDC). I want to make sure I have things I’m most likely to need, but at the same time I don’t want to carry too much crap around all the time. I like looking at what others carry because I figure I can learn from that. With that in mind, I signed up for a couple EDC groups on Facebook. I learned a few things quick. For one thing, lots of people EDC too much stuff. For another, lots of people love to show off. (Those 2 facts could be a whole series of posts…) I also learned that lots people don’t know when to STFU.

OK, so there’s nothing wrong with bragging about your gear or showing off pictures of it. I’m a gear junky myself, so I get it. The problem is the way some of these idiots are doing it. I’m not all “tactical” and I’m not a big fan of the acronym de jure, but there is this little thing called OpSec (Operational Security) and guess what? Even if you’re just an average Joe, you need to be practicing it. I’ll give you an example…

John Doe joins the FB group “mall ninja edc.” It’s a “private” group, so he feels safe. What he doesn’t realize is that any FB member can search for “mall ninja edc” and find the group and request membership (which is almost always granted). Next, John posts a picture of his “super tactical guy” edc setup, along with a description of all the other tacticool junk he has that isn’t in the picture. No problem, right? Just having a little fun doing a little showing off. There’s one small problem. John never made his profile private, and it proudly shows where he lives, where he works, etc. Doesn’t matter though because no one cares about that kind of stuff, right?

In my opinion it DOES matter. John has just exposed his information to millions of people, at least a few of whom might be criminals looking for easy scores. If they happen to live in the same city as John, they just found one. It doesn’t take a genius to go to the County Recorder’s page for John’s county and find his home address. If he doesn’t own his home, he can still be found easily. Just go to his work around quitting time and look for the guy who matches John’s photo on his FB profile and follow him home. You already know he’s got a lot of cool stuff you want to steal, and he might have even given away his self defense strategy. EASY MARK!!! All because John was ignorant of OpSec and didn’t know when to STFU.

Don’t be that guy. Don’t brag about all the cool stuff you have and post it online along with information that makes it easy for just about anyone with half a brain to find out where you work and where you live. In other words, KNOW WHEN TO STFU.