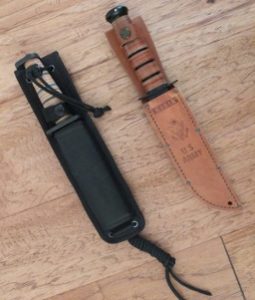 When I was a kid, Buck knives were considered to be the best hunting knife you could get. Today, over 40 years later, Buck still makes great knives. The classic models are even still made in the USA. When I saw the Brahma version of their 119 Special I had to have one. The Buck Brahma has the same wonderful 420HC blade as the Special, combined with the classic good looks of a Ka-Bar military blade. After reading some of the negative reviews I almost changed my mind. More than a few were having issues with the handle being loose or misshapen. I decided to order one anyway. I figured the worst thing would be I’d get a chance to try out Buck’s customer service.

I ordered my Brahma from Amazon and had it in two days. It didn’t have the handle issues that some of the reviewers on Amazon were complaining about. So far, so good. The first thing I did was compare it to my Ka-Bar. Yep, looks just like the Ka-Bar’s little brother. Nice. Overall quality seemed good, so lets look at the details.

Buck Brahma (next to Ka-Bar 1220 for size comparison)

My Brahma didn’t show any problems with the handle. The leather washers were all tight, finished to a smooth contour, and the whole assembly was correctly aligned. The leather looks like it has no finish, so I’ll treat mine with beeswax or something to help protect it. The handle gives 4 inches of grip between the finger guard and pommel. My hand fit (barely), but those with larger hands might have a problem.

The Brahma handle fits my hand with no room to spare

The blade guard has lanyard holes on both sides and there’s a third lanyard hole in the pommel. The pommel itself attaches to the tang with a small threaded nut and a steel pin. I don’t like this, because using the pommel to hammer something (knife abuse!!!) will likely damage the nut. Not a great design. Looks really cool, but not so sure about durability if you actually used it as a pommel…

The nut and pin that hold the pommel in place. Also note lanyard hole

The Buck Brahma uses the same blade as the 119 Special. This could be good or bad, depending on how you intend to use this blade. If you’re going to use it as a hunting knife, it’s ideal. The hollow grind slices nicely, and the up-swept tip means it can do a passable job at skinning. If you’re planning on using this as a bushcraft knife though, my advice would be – don’t. The same features that make this blade so nice for processing game also make it too delicate for serious wood processing chores like chopping or batoning IMO.

Buck Brahma blade (next to Ka-Bar 1220 for size comparison)

So back to game processing… The Brahma blade is ideally suited for processing game, but for some reason Buck decided to put some kind of coating on the blade. Some have stated it’s for “corrosion resistance,” but since Buck has shipped thousands (if not millions) of 420HC blades without coating  before the Brahma, I’m guessing it’s more for looks. That’s all fine and dandy, except it comes of really easy (you can see it on my hands in some of the pics). I don’t know about you, but I don’t like having unknown coatings transferring from my knife blade to my meat. Before using this on game, it would probably be a good idea to remove all the coating from the blade.

I think it’s actually a pretty nice sheath. It’s mostly made from black nylon cloth of some sort. There’s a Kydex pocket that holds the blade which is sandwiched between the main part of the sheath on the back and a leather cover on the front.

Good: The Buck Brahma is a classic Buck hunting knife updated to look like a US military fighting knife. Made in USA, backed by Buck’s limited lifetime warranty.

Not so good: Pommel is mostly just for looks, not function. Coating on blade needs to be removed before processing game. Seems to be targeted at bushcrafters, but blade not suitable for bushcraft IMO.

Last word: The Buck Brahma is a really nice looking knife with a great hunting blade. If you’re looking for a hunting blade, though, you might as well just get the original – the Buck 119 Special. Heck, or maybe even a Pathfinder. If you want a more versatile blade but find the Ka-Bar 1220 series too big, consider the Ka-Bar 1250. It’s about the same size as the Brahma with a blade better suited to heavy use.