Haven’t had much time to write lately. Went through some life crises but all is well now so hear I am. Anyway, a Bushcrafter, a Survivalist, and a Prepper walk into a bar. The bar tender looks up and says “Are you guys identical triplets?” I know it’s lame. If you’re reading this blog you already know what a bushcrafter is, but what’s the difference between a survivalist and a prepper? It’s something I wonder about and it seems to be a pretty common question. Last week at my monthly prepper group someone asked and for the first time I heard an answer that was simple and made sense.

The guy who runs our group is who gave the answer. He describes himself as a former survivalist who’s now more of a prepper (when I use those terms, it’s without some of the connotations the media likes to ascribe to them). His answer was short and sweet:

If you think about it, it makes sense. Take knives for example. A survivalist will want to know how to make his own. After all, ancient people did so why not? Find a suitable rock, figure out how to put a sharp edge on it, find a stick, figure out a way to attach the “blade” to the “handle” and viola! A knife. A prepper just goes out and buys a couple (or a couple dozen) knives.

Same with fire. A survivalist will know a half dozen ways to make a fire using nothing they can’t find in the wilderness. A prepper will have a couple ferro rods, several types of matches, a few butane lighters, and maybe a flame thrower.

I could go on, but that should be enough to understand the idea. A survivalist hopes to really mostly or entirely on skills. A prepper relies a lot (some say too much) on gear. Both have some valid points to support their views. A survivalist will say you can have all the gear in the world, but if you don’t know how to use it, or it gets lost or stolen, you’re still dead. A prepper will point out that sometimes you need gear know matter how much skill you have. For example, the world’s best skydiver falling out of an airplane without a parachute…

So what about the Backyardsman?

Where does this leave the Backyardsman? Is he (or she) a prepper or a survivalist? I think both. I tend to the prepper side. What can I say? I’m a gear junky. At the same time, I know my gear won’t do me or my family any good if I don’t know how to use it. I also know I need to provide even if I lose my gear. I know I don’t spend enough time learning skills.

What it comes down to for me is balance. If you’re just doing it for fun then do what is fun. If you’re concerned with the way things are going though, and want to “prepare” for bad times, keep it balanced. If you’re strong on skills but light on gear, look to see if there is at least some gear that can fill in on areas where skill might not be enough. If you’re heavy on gear but lacking skills, hide the credit card, get out in your back yard, and learn some skills.

Every other month I look forward to the latest issue of The Backwoodsman. When I found this magazine it was like a breath of fresh air. Especially Being a “Backyardsman” in the July/August 2017 issue. Scott Siegfried could have been speaking for me. Like him, I wish I lived in a much more rural or even wild environment, but job and family responsibilities keep me in the city. But how can you be a backwoodsman in the city? His writing is full of ideas on living a backwoodsman life in the city – he calls it being a Backyardsman. I liked the idea so much that I decided to start this blog to explore it further. But how to be a backyardsman? How much can you really do in the city? If you think about it, quite a lot…

How to be a Backyardsman???

The first thing I read every time I get the latest issue of The Backwoodsman is read the Reader’s Requests box at the start of the letters section. This gives me an idea of what other people are interested in. Hopefully an idea for something to write about maybe. There are usually lots of good requests, but one in the March/April 2018 issue really surprised me – “How to be a Backyardsman.” Really? Every issue is packed with things you can do without being out in the woods. I got to thinking about it though and I’m guilty of the same kind of thinking sometimes. “Gee, if only I didn’t live in the city…” “Dang, if only I could take a month off from work and forget that I had a family to take care of, bills to pay…”

How to be a Backyardsman

First of all, what is a backyardsman? To quote Scott, “A backyardsman is basically a backwoodsman who sticks closer to home. He enjoys reading about survival, camping, old-timey stuff, self sufficiency, homesteading, etc. Dabbles in some ‘backwoodman-esque’ activities and hobbies. He may have a workshop where he makes…”

Well, you get the idea. Do you need to be living in a cabin or a tent to do any of these things? No. In fact, you could even do most of them in your… back yard. Wasn’t that easy? I’d even say that if you’re new at this, practicing in some skills in your backyard would be better than trying them for the first time in the back woods. For example using a tarp as an emergency shelter in a snow storm. Where would you rather try this for the first time? In your back yard, where failure means you go inside, have a cup of coffee, and think about what went wrong? Or out in the woods after a 10 mile hike, in territory you don’t know too well, where failure could mean that you freeze to death?

Of course there are some things you can’t do in your back yard. Unless you’re incredibly fortunate, you probably can’t shoot a gun or hunt in your back yard. Heck, where I live it’s illegal to even shoot a BB gun in my back yard. That doesn’t stop you from building a black powder rifle kit though. Or learning to build an AR-15, refinishing the stock on an old rifle, making a custom set of grip for a handgun, reloading ammo, or studying for a CCW permit.

If you’re still doubting, just look through any issue of The Backwoodsman. In the latest issue, you can learn how to use a bow drill to start fires. Discover how to learn about your personal area of operation (AO) by going on micro adventures. Learn about whittling. How to make a quilt. Re-purpose a length of rebar into a walking stick. Make homemade grape wine. Put together a low budget camping kit. There is even a good write up on how to survive an active shooter situation. That’s just one issue, and every single one can be practiced in your own back yard. Heck, some of them don’t even require a back yard – a small bench somewhere is plenty of room.

What was the question?

Oh. “How to be a Backyardsman?” I hope this post answers the question. Being a backwoodsman or a backyardsman is a state of mind. You don’t have to be out in the woods to have that state of mind. You can have it and practice a lot of back woods skills right in your own back yard or abode. 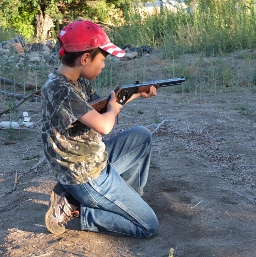 Welcome to The Backyardsman. You might be wondering just what a Backyardsman is. Simply, it’s a play on the word Backwoodsman and I’ll admit to blatantly borrowing the term from an excellent article by Scott Siegfried that appeared in the July/August 2017 issue of the Backwoodsman. To quote Scott, “a backyardsman is basically a backwoodsman who sticks closer to home.” Simple, right?

I wish I could spend all my time hunting, fishing, hiking, camping, and practicing outdoor survival skills, but I can’t. Mundane things like a family to support, an elderly parent to take care of, a job… just seem to get in the way. On the other hand, I’m not content to just sit in my arm chair and read about how others are living the kind of life that I sometimes envy. I’ll never be a Davy Crockett, Daniel Boone, Creek Stewart, E J Snyder, or “John Mosby,” but that doesn’t mean I can’t learn new things – even survival skills – in my own back yard. I hope you find something interesting here and enjoy the ride…