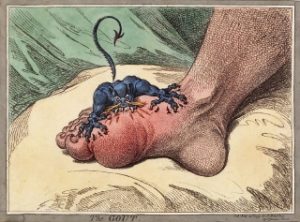 For the past few years I’ve had occasional gout attacks. Usually only a couple times a year, but in the past 2 months I’ve had 3 gout attacks. If you’ve never had the “pleasure” of a gout attack, let me just say it’s impossible to do just about anything except sit on your butt during the gout attack. Obviously not a good place to be during a situation where you need to me moving and moving fast. So what about gout treatment? I’m not a doctor and there is lots of good information online. I’m not going to pretend I’m an expert telling you how to treat gout. Instead I just want to talk about my experiences with gout. What causes it, symptom relief, and where to get more information on it.

So what the hell is gout?

Well, gout is hell. At least it feels like hell when you have it. It’s joint inflammation caused by urate crystals building up in the joint. The crystals build up because of high uric acid in your blood. The uric acid is the result of your body breaking down purines. That’s about as far as I want to go, for a more detailed explanation click here. What’s important is the result. The joint hurts like hell, you can’t bend it, and if it’s a foot joint (most likely your big toe or ankle) you’ll have trouble walking. Wait though, sometimes it gets even worse…

If you have gout in one foot, you’re going to favor the opposite foot and leg (especially the knee) when walking. This puts lots of extra stress on the other leg, so guess what happens? The extra stress on the joints in the opposite foot can cause a gout flare up in that foot. Or, if you have a bad knee, that can go out too. If that happens, you can’t bend your knee so no driving to the store for simple things. Like pain medicine. Which is OK, because pain medicine doesn’t do much to relieve the pain from gout. So can gout be prevented or treated?

Can you prevent gout?

In my opinion, no. Of course, some experts disagree with my opinion and they’re probably correct. Supposedly avoiding certain foods that are high in purines (meat, seafood) and alcohol (especially beer) can help prevent gout. Great… my 2 favorite food groups are the cause of grout. In my experience, that’s not necessarily true.

Yes, I’ve had gout attacks while eating meat. But I eat meat (and seafood) all the time. If that caused gout, I think I’d have attacks more often. The same with drinking. I’ve had gout attacks during periods where I was drinking pretty heavily, but I’ve also had them during times I wasn’t drinking at all. Sometimes when I have a gout attack I stop drinking, other times I don’t. It doesn’t seem to make any difference in how long the attack lasts.

Some doctors recommend taking medicine that lowers your uric acid levels, but from my reading, and talking to people who’ve taken them, I’m not going to. They can cause long term health problems that are worse than gout.

In my opinion, once you have gout, you have it and there is no “cure.” That doesn’t mean you’re in constant, every day, 24/7 excrutiating pain, but the potential for an attack is with you for the rest of your life. Making lifestyle changes can probably decrease the frequency of gout attacks though.

What about gout treatment?

Even though you can’t treat gout, there are things you can do to help with a gout attack. Try Googling ‘what about treating gout’ and you’ll get lots of hits with lots of different opinions. This is what works for me:

Anti-pain cream: I’ve tried lots of different anti-pain cream to try and treat my gout. In my experience, none of them work – AT ALL. Well, there is one exception. A product called Austrailian Dreams seems to provide some relief. Not a lot, but when you’re talking about gout pain, every little bit helps. Australian Dreams is available at most drug stores (well, at least CVS and Walmart pharmacies), but it’s expensive – about $30 for a 4 oz. jar.

OTC pain pills: I’ve tried several ibuprofin and acetaminophen. Neither do much good. I even had some prescription 800 mg. ibuprofin pills that didn’t make a dent in the pain.

Staying off it: This actually works pretty good. I’ve found that if I try to hobble around my gout attacks last as much as twice as long. If I can stay home (and avoid walking to the mail box, garage, refrigerator, up and down the stairs, etc.) the pain is less intense and goes away faster. Also less risk of blowing out my knee or having a secondary attack in the opposite foot.

Natural remedies: I’m not a big believer in natural remedies. I’m not opposed to them, I just don’t believe they work. Well, maybe except with gout. My wife said that goji berries are helpful. A friend at work (who has gout) says sour cherries can provide some relief. Other things I’ve read about that can help are raw organic honey, skim milk, yogurt (???), and tumeric. So for may latest gout attack I started drinking smoothies.

I use 60 dried gogi berries and boil them in about a cup of water until they’re soft. I throw them in my Vitamix with a handful of frozen sour cherries, half a cup of skim milk, a couple tablespoons of yogurt, and honey to taste. After blending it, I use it to wash down a tumeric tablet. I do this twice a day, plus take an extra tumeric tablet during the day and another just before I sleep. And you know what? It seems like it worked. My attack only lasted 3 days and the pain was less intense than earlier attack.  How about that natural gout treatment?

This is getting longer than I usually like to go. I wanted to get into gout and how it could affect the backwoodsman (or backyardsman), but I think I’ll continue that in another post.