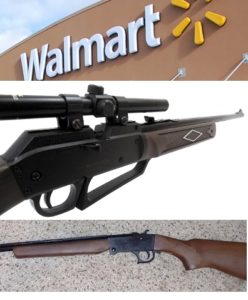 Would you buy a gun at Walmart? I’ve had mixed experiences with any gun related purchases at Walmart. A few years ago I bought a Ruger 10-22. The clerk was nice until he found out I wanted to buy a gun. Then all of the sudden I’m being treated like a suspected felon (though they did sell me the gun). Buying guns at Walmart? You’ve got to be kidding me.

A year later I tried getting a hunting license. The clerk insisted that I needed a copy of my Hunter’s Safety Certificate. Never mind that I’m over 50. Never mind that I had the previous two years’ hunting licenses with me. Nope, according to the clerk I needed a 42 year old document from a different state that’s probably been lost for 40 years. I finally convinced her to sell me the d@*! license, if I could remember the exact date my safety certificate was issued. So I made up a date and got the license.

Usually that kind of crap would make me want to never buy any sporting goods at Walmart ever again. Small problem with that idea though. A few months ago Backwoodsman Magazine published a piece on the Hatfield SGL shotgun. I decided I needed one and the only place in town that has them is Walmart. Hmmm…

I went to look at their gun display and a clerk walked up and asked me what I was looking for. I viewed this as an interruption because usually the Walmart clerks don’t know jack about guns. But since he asked, I told him I was looking for a Hatfield SGL single shot shotgun. Wonder of wonders, he actually knew what I was talking about. He pulled a 12 gauge out of the display case to show me and mentioned they also had the 20 ga. and 410 versions in stock, but not on display.

I told him I was interested in the 410. He said that’s a fun choice, but pointed out that 410 ammo is over twice the price of 12 or 20 ga. so I might want to consider the 20 ga. instead. We talked a bit and I thanked him for his time. I wanted to check 410 ammo prices online before deciding between the 410 and 20 ga. He agreed that was a good idea and thanked me for coming in. Wow, where was this guy before?

After checking ammo prices online, I decided on the 410. I went back the next day hoping to get the same clerk. No luck, he was off. The lady clerk asked me what I wanted. I told her I wanted to buy a gun.

“Good. That way you won’t have to pay for a background check.”

WHAT??? Two clerks in two days that are knowledgeable about guns? Unbelievable… So I did my FFL form and walked out of the store with two guns…

The same issue of Backwoodsman Magazine that had the article about the Hatfield SGL also had one on the Daisy 880 pellet gun. I decided I needed one of those too. Since Walmart had them on the shelf for only $35.00 (with scope!!!) I decided to get one of those while I was there.