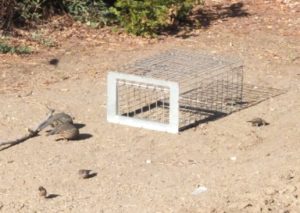 It’s kind of funny. I live in the burbs, but I see more wild game animals on any given day than I did during an entire hunting season in the small town where I grew up. Where? In my own back yard. Every day I have dove, quail, and cottontail rabbits in my yard. At night I can hear coyotes yelping. Canadian geese fly over my neighborhood a couple times a week. Less than a mile from my house there is a creek where ducks swim daily. I’ve even seen raccoons a few times. AND I CAN’T HUNT ANY OF THEM BECAUSE I’M IN THE BURBS. It’s really frustrating. So much game and no way to legally harvest any of it. Well… I can’t shoot in town and my back neighbors attract a lot of pigeons with their bird feeder. So I decided to try experimenting with a pigeon trap.

What I’m describing may be illegal according to your local game laws, city and county ordinances, etc. Please know your local laws. This information is provided only for entertainment and educational purposes. No birds were harmed in the making of this blog post.

So much wasted game…

Did I mention how frustrating it is to be surrounded by wild game and not being able to hunt it? Well, I thought I found an ‘out.’ The neighbors behind me attract a lot of pigeons to their back yard. Pigeons aren’t a protected species where I live. If I harvest them, I’m not breaking any game laws. I can’t shoot them (even air rifles and bows are illegal to shoot within city limits where I live). Maybe I could trap them? It turned out that my boss already owned a pigeon trap and he let me borrow it.

I was really excited. He brought the trap to work on a Monday and I took it home. On the way I stopped at Walmart and got a big bag of wild bird seed. The next morning, I noticed some pigeons sitting on my neighbor’s roof. I thought… this is going to be a good day. I set out the pigeon trap and dropped in a few handfuls of seed. Now all I have to do is come home in the afternoon to a trap full of tasty pigeons. I could almost taste them…

When I got home the trap was empty. Not just empty of pigeons, but all the seed was gone too. WTF??? How did they get out of the trap if they went inside to eat the seeds? I found out the next morning. I filled the trap earlier so I’d have time to watch it a little while before I went to work. After about 10 minutes, some blue jays showed up. In and out no problem. Not trapped by the trap at all. And eating my seed. OK, that explains it – effing BLUE JAYS. Maybe time to break out the pellet gun…

I decided to wait for a day when I could stay and watch what was going on. The next Saturday I put out some more seed and watche. Sure enough, the blue jays showed up first. They didn’t stay long though – just ate their fill and left. Next the sparrows showed up. I think they are the ones who eat most of the seed. After that, some dove and quail came in. The dove would go into the trap, but they’re small enough to get out without help and most did. I also had some quail checking it out, but they wouldn’t go into the trap. The, finally, some pigeons showed up. I was really hoping they would, but they didn’t..
For the entire day, I only “caught” a few dove that were too panicked to let themselves out of the trap. Since it isn’t dove season (and it might be illegal to trap dove) I let them go. My next step will be trying a different bait that’s more attractive to pigeons. Maybe a corn cob, or some bread crumbs. I’m not ready to give up yet…

2 Replies to “Experimenting With a Pigeon Trap”