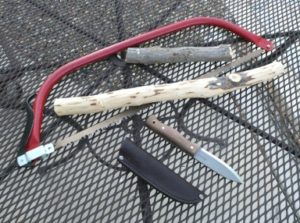 I’m looking into ways of legally hunting in my neighborhood. Guns are out (including air guns), and hunting with a bow is also illegal within city limits. Last week I experimented with a pigeon trap. This week I decided to make a rabbit stick. A rabbit stick, aka throwing stick, is one of the most primitive hunting tools you can use. Even so, it can be very effective if you have the skill to use it. Most importantly to me, it might be legal to use. Still need to check those game laws though…

Making the rabbit stick was really easy. I had a bunch of locust wood from a tree we took down earlier this year. Locust wood is pretty strong and dense so I figured it would work good as a throwing stick. I picked a piece about 2 inches in diameter and cut it to match the distance from my finger tips to my arm pit. That’s the length Dave Canterbury recommends in his book Advanced Bushcraft. After messing with it a little, I decided it felt too long so I cut it shorter. Now it reaches from my palm to the middle of my bicep. Feels a lot handier, but still long and heavy enough to hopefully do the job on rabbits.

This is a nice simple project that doesn’t require and power tools or special skills to make. I used a bow saw to cut the wood to length, then my Condor Bushlore knife to smooth it out, strip the bark, and put a little bevel on each end. It looks OK but I’ll probably but some linseed oil on it so the wood doesn’t dry out and crack.

It turns out it’s a lot easier to make a rabbit stick than it is to use it effectively. You have to throw it side armed instead of overhand, and it takes some practice to be able to throw it accurately. I’m getting there, but I’m not quite there yet with accuracy. Also, you have to throw it hard enough to put the rabbit down.

Speaking of that, have you ever heard an injured rabbit scream? The sound is well, lets just say you’re going to get a lot of unwanted attention. Make sure you’re close enough to finish the job quickly. Before the neighbors call the cops or whatever. Oh, and check local game laws before trying this at home…

If you’ve never done any bushcraft before, a rabbit stick makes a good first project. It’s simple to make and gives you practice with a bow saw and knife. I kept mine really simple, but there are some really nice rabbit stick projects you can find online with a little searching.

Learning to use your rabbit stick helps build your hand-eye coordination, skill at judging distances, and hopefully will provide you with some tasty dinners. Make one and have fun.

One Reply to “Making a Rabbit Stick”